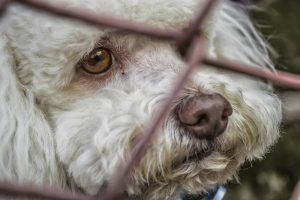 The world has been shaken by the terrible war in Ukraine. We’ve all watched in horror the shocking images, reports and video footage of families having to leave their homes as they flee to safety, often leaving family members behind to fight to protect their country. It’s a humanitarian crisis on a huge scale and governments, charities and many individuals are doing all they can to help – from providing practical support to equipment and financial aid. But, while the news quite rightly focuses on the humanitarian tragedy, we can’t overlook the devastating affect this war is having on the pets and animals of Ukraine, too.

People are fleeing their homes in terror, often grabbing just a few essential belongings for their journey. For many, this includes their beloved pet, and millions of Ukrainians are battling against all odds to get the whole family, pets included, to safety – which can include long walks to the border, sometimes having to carry elderly pets who can’t manage the journey. But seeking refuge in another country is not always an easy process and many are finding that with a pet in tow this becomes increasingly difficult. Animal charities are offering immunisations, veterinary care, microchipping and emergency pet passports at borders to help pets to stay with their owners as they cross into neighbouring countries, but this is not always possible, and other charities are picking up strays who’ve sadly been abandoned at airports or refugee camps when people have been unable to continue on their journey to safety with their four-legged friends. This is a heart-breaking situation; I can’t imagine the horrors these people must be going through, the fear they have for their family’s safety and the upheaval of having to leave every part of their lives behind – only to then have to leave behind their beloved pet, too. As we all know, pets are very much part of the family and having to abandon them must be a devastating decision.

There’s also been a huge increase in the number of animals handed over to shelters within Ukraine, as some families are unable to even attempt the journey with their pets – and these shelters are buckling under the pressure of trying to feed this ever-increasing number of animals with limited supplies and, of course, the ever-present threat of attack. I have huge admiration for those incredible animal-lovers who are battling through to provide care in the most demanding and terrifying of circumstances. Charities are providing truckloads of food whenever possible to these shelters to prevent the animals from going hungry, but this is certainly not an easy task. Brave volunteers are risking their lives to drive the supplies into Ukraine and get out again before the nightly curfew is imposed. With reports of civilian vehicles being shot at this is an unbelievably courageous thing to do. Many animal charities, such as Underdog International and PETA amongst others are raising funds, supplying essentials such as food, cages, blankets and veterinary treatment, and organising rescues to help animals to safety.

Of course, there are many other animals in the Ukraine who are also affected by the war. Bears, lions and tigers are amongst those that have been rescued from animal sanctuaries and taken to safety elsewhere in Europe, but sadly many others have been left behind. At the time of writing, there were around 4,000 animals in Kyiv Zoo, with keepers saying there was no scope for a safe rescue of that scale and, despite having staff on-site 24/7 doing all they could to ensure the animals’ safety and welfare, they had limited food supplies to keep all the animals fed and healthy. But the restricted supplies of food and the imminent threat of bombings is not the only issue the zoo has to contend with – the animals are fearful of the constant loud bangs and air-raid sirens so their keepers are having to work hard to keep them calm amidst the chaos of war. According to a report in The Independent, “Elephants and some other animals are being given sedatives to calm them down during the explosions and shooting from the close bombardment. Other animals have been moved to enclosures indoors or underground.”

The whole situation in the Ukraine is beyond comprehension and my heart goes out to everyone who has been affected. We can only hope that somehow there will be a swift and peaceful resolution and, hopefully the people and pets who have been separated from their loved ones can soon be safely reunited.

If you would like to make a donation to help charities supporting the animals in Ukraine, you can find a list here: https://www.animalscharities.co.uk/ukraine.

If you would like to donate to support the humanitarian crisis in Ukraine, you can donate via the Red Cross to the DEC Ukraine Humanitarian Appeal

(Please be aware, if you are donating to a UK charity that’s not well known or not one you have heard of before you can check their name and charity registration number on the Government’s charity register to ensure it’s a genuine organisation. Sadly there are some very unscrupulous individuals who will create fake appeals to attempt to profit from any situation.)