Just like humans, all dogs have their moments where they can go from seeming like highly intelligent creatures to, well, a little less so. One minute they’re obediently sitting and giving you their paw on command, the next they’re patiently waiting by a closed door when the one next to them is open. I mean, I know I have the odd lapse where I do something questionable, like putting the milk in the cupboard and the teabags in the fridge, and I wonder whether my brain has temporarily evaporated… No one can be clever ALL the time! But, like the dog equivalent of MENSA, there are some breeds that are recognised as being super smart – a cut above the canine average in terms of intelligence.

Psychology professor Stanley Coren has conducted a lot of research in this area and published many books and journals, including ‘The Intelligence of Dogs’. According to this book, and Dr Cohen’s research which involved surveying 200 dog obedience judges, the top 10 cleverest dog breeds are as follows…drum roll please… 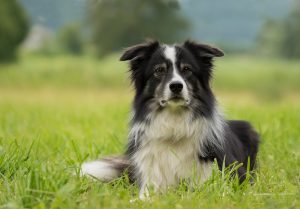 Well, it comes as no surprise really that this breed tops the list of clever dogs. Their high energy, working ability, intelligence and willingness is well-known and documented and they’re often used as sheep dogs due to their agility, faithful protective nature, and strong instinct. What puts them at the top of the list is their ability to learn very fast.

Their cute faces and pompom hair may not always seem synonymous with high intelligence, but don’t be fooled! Poodles are very smart, active and obedient dogs. Originally bred for water retrieval, these bright pooches are easy to train. They’re known as great problem solvers and were even used by the US military during WWII. 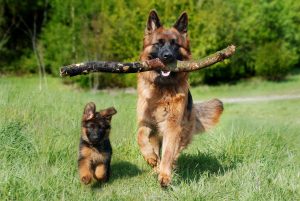 A popular choice as police, military and guard dogs, German Shepherds (aka Alsatians) are loyal, reliable, and courageous. The roles they often work in make the most of their natural protective instincts and great sniffing power. They’re also one of the brightest breeds, and one of the few who are able to learn commands almost instantly – sometimes on the first go!

A popular family pet but also highly intelligent, these dependable, gentle souls were actually originally bred for hunting. They’re capable of learning 100s of commands, which is a pretty impressive vocabulary for a four-legged friend! 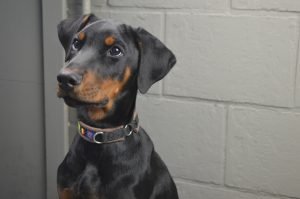 Smart and easy to train, Dobermans are much more gentle in character than we’re sometimes led to believe – many people assume they’re fierce as they’re often trained as guard dogs or used in the police and military but these roles are, in fact, earned as a result of their intelligence, not their aggression. They may be fearless and fast but they’re also very obedient and highly trainable.

Bearing a resemblance to the rough collie – a breed made famous by TV’s heroic (and very intelligent) ‘Lassie’, the Shetland Sheepdog (Sheltie) is actually a related, but distinct breed. Agile, obedient, clever, affectionate, loyal and easy to train they’re known to have a danger-sensing ability and herding skills, as well as being able to learn complex things very quickly. Clever pups! 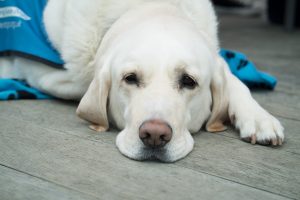 Labs can be experts at concealing their considerable intelligence! Don’t be fooled by the ‘big, daft, docile’ guise – they’re patient, gentle, smart and highly trainable with an exceptional sense of smell, all attributes which lend themselves to working as police, search and rescue or assistance dogs. According to Dr Cohen, labs are one of the only breeds capable of ‘self-training’ by observing, learning and repeating human behaviour. Impressive!

Now, be honest, who saw this coming? We shouldn’t judge a book by its cover (or a dog by its fur) and, as Reese Witherspoon so accurately portrayed in ‘Legally Blonde’, beauty and brains are certainly NOT mutually exclusive. Unless you know this smart little breed you may jump to the wrong conclusion but these intelligent, agile, trainable pooches are also much stronger than they look. They’re the only small toy breed to earn a spot in the top 10. 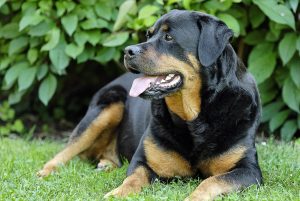 They’ve may have a reputation for being the ‘Grant Mitchells’ of the dog world (and, bless him, he wasn’t renowned for his high IQ! To be clear, I’m talking about the EastEnders character here, not the actor Ross Kemp, who’s actually a very clever chap!). Anyway, I digress. Rottweilers are certainly not thugs. They’re loyal, loving companions and very intelligent and obedient. Their trainability actually led them to be one of the first breeds to be used as guard dogs.

Rounding out the top 10 are these energetic, agile and highly mentally active dogs originally bred for – you’ve guessed it – herding cattle in Australia (I wonder what gave that away?). They’re very active and need stimulation so it’s recommended that owners keep them busy with sports or work as they may otherwise find their own mischievous ways to occupy that busy mind. Dr Cohen says they’re so smart and organised, they even put their stuff back after using it! Sounds like they could teach some humans a few things… does anyone want to hire one to train their kids?!?

Now, if you’ve read this and are starting to feel offended on behalf of your four-legged friend who may not have made the list, don’t be! Remember, dogs are all individuals and there are always going to be exceptions to this generalisation. Just because your pooch isn’t in the top 10 it doesn’t mean it’s bottom of the class, and vice versa. These 10 breeds won’t automatically get a free pass to doggy university! Not all collies will be super bright, and some Afghan Hounds (which, notably, were rated by 120 of the 200 judges as being the ‘least smart’ breed, bless ‘em!) will be super clever and trainable. Of course, much of it does come down to training – you can’t just buy a collie and expect it to go out and round up a herd of sheep. Like people, dogs need education and guidance. And that’s worth remembering … while any of these breeds can make great pets, do bear in mind that if you get a highly physically and mentally active dog it will need stimulation as well as exercise. Some dogs are happiest when their brains are kept busy.

Which brings me to that old adage “You can’t teach an old dog new tricks” – we’ve all heard it, but is it true? Well, apparently not. According to research conducted at the University of Veterinary Medicine, Vienna, older dogs DO learn, albeit more slowly than pups. In a study on 95 border collies aged from 5 months to 13 years all the dogs learnt but the older ones, in some scenarios, required more trials to pick up the skill as they were less flexible in their thinking. Interestingly though, the older dogs performed better in logical reasoning tasks and there was no difference in the memory tests performed 6 months later on the dogs; they could all still fulfil the tasks that they’d learnt previously. This just goes to show that older dogs certainly can still learn, but it may just require a little more patience. I think many of us can relate to that…!