Being a vet and dad of a toddler can mean life’s pretty hectic but I had a rare opportunity for a chilled out morning the other day, and I sat in the sunshine enjoying a cup of coffee with Ziggy purring away on my knee. It was bliss! Like many cats, whether he sits with you or not is entirely on his terms but, that day, he decided I was worthy of his attention and his presence was so relaxing. I started to think about the strange new(ish) phenomenon of ‘cat cafés’ that seem to be becoming more and more popular. With Ziggy on my knee and a coffee in my hand I could sort of see the appeal but, as a vet and an animal lover, something didn’t quite sit right with me so I started to do a little research to find out more about this new trend… 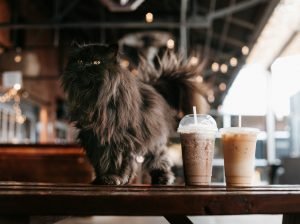 Cat cafés originated in Taiwan; the craze began in Taipei in 1998. The first UK cat café opened in Devon in 2013 and, since then, more and more have popped up around the country with several now open in the Midlands. The premise of a cat café may seem like a good idea – the cats are free to roam around and patrons (typically cat lovers) can enjoy the company of feline friends as they eat, drink and chat. Many operate as adoption or rescue centres too, providing a place for rescued cats to live and helping them to find new owners. Sounds all well and good … but in reality it’s not quite that straightforward.

The cats’ welfare is of paramount importance and, as we all know, cats tend to live their lives very much on their own terms. They’re often solitary, independent creatures and no two cats are the same. If we have visitors to our house, Ziggy will often take himself off for some peace and quiet – he’s not the biggest fan of new people. So, a constant stream of different people coming and going and trying to fuss him would be very stressful for him. Not all cats are like this of course (most are), but finding the ‘right’ cats for a café would be involve a very long and drawn out ‘interview and selection’ process to find the select few cats who were comfortable with constant and ever-changing company. Somehow I doubt that this always occurs.

Ideally cat cafés should also have a quiet space for the cats where they can retreat to should it all get too much, and some outdoor space to explore as well – but again this isn’t always the case.

Most cat cafés have ‘House Rules’ including no picking up cats, no stroking them while they’re sleeping, no chasing them around (or letting kids chase them) and no flash photography, amongst other things. It’s up to the management and staff to ensure these rules are followed but, from the many pictures I’ve seen online and Google Reviews of various cat cafés, they’re very often broken. Customers need to have a lot of respect for the cats, understanding that they are guests in the cats’ home environment and safe space. Unfortunately, in the same way that each cat’s individual personality can’t really be full assessed before they join the café, neither can the customers’! As much as, in an ideal world, you only want calm, quiet, genuine cat lovers who’ll respect the animals’ need for space, you’re also going to get customers (and kids) who want to chase them around and have a photo cuddling their favourite. The cats are effectively being put on display and there’s definitely a very uncomfortable element of them being there as a spectacle for our ‘entertainment’. It’s all a bit circus-esque. People will go with the expectation of being able to stroke or cuddle cats, or sit with one on their knee. If Kitty’s not feeling like it that day the customer will either have to go home disappointed or, more likely if they’ve been waiting a long time for this ‘experience’, they’ll try to manipulate the situation to get what they want. 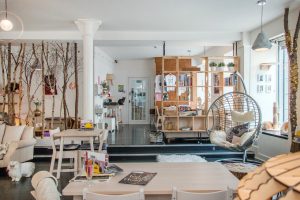 Another concern is the lack of formal regulations for cat cafés. Obviously they’re governed by the Animal Welfare Act, but without specific legislation relating to such businesses it’s a bit woolly. The welfare of the cats should be constantly monitored to ensure they’re not showing any signs of distress – but cats can be quite good at hiding this. They can ‘fake sleep’ so they look relaxed, but actually they’re in a state of hyper awareness, listening constantly for signs of danger.

Of course in a café there’s also food hygiene to consider, too! Having a large number of cats in and around a food preparation and serving area isn’t necessarily going to be conducive to cleanliness.

In 2015 a cat café in Leicester (which later closed) received a 1 star food hygiene rating and reports from the public of ‘an overwhelming smell of cat faeces’ and cats that ‘looked very sad’.

In essence, as I say, the idea probably came from a good place – especially for those cafés that also help to rehome or adopt cats. However, in reality, our complex little feline friends have needs that just aren’t suited to this kind of environment and an ever-changing mix of new people coming and going. They’re often naturally aloof so won’t enjoy being an ‘attraction’ that people pay to come and coo over. The fact that it’s becoming quite a popular craze makes it even more concerning as the phenomenon will move beyond genuine cat lovers with the right (albeit possibly misplaced) intentions, and become more commercialised, with less scrupulous individuals cashing in on what could be viewed as an easy money-making scheme. With customers paying an admittance fee (supposedly to support the cats welfare) as well as paying for their food and drinks, there’s certainly money to be made and that won’t have escaped people’s notice. The charity Cats Protection leave us in no doubt as to their views on these establishments, strongly voicing their opposition: “We believe this kind of environment is not suitable for domestic cats because they have evolved as solitary animals and generally do not choose to live in social groups – unlike dogs which are a social species. It is very likely that some or all of the cats involved will become stressed as a result of being in a confined space with a continually changing group of people.”

So, overall, I’m certainly not rushing to show my support for cat cafés. Yes, I can see that for a certain few cats with the right personalities and more sociable traits, and a certain few customers with the right level of patience, understanding and respect for our feline friends, they could potentially work, if governed by strict welfare and hygiene standards. But, with the numbers of cat cafés popping up all over to meet ever-increasing demand I’m highly sceptical that these incredibly unique set of circumstances will be met by all – if, indeed, any – of them.

I realise I’m very lucky to be able to relax with Ziggy on my knee at home and, if you crave the companionship of a cat and can offer the right loving, caring home environment, I’d highly recommend adopting your own cat rather than booking a table at a cat café.