Well folks, here we are again, hurtling towards another Christmas (one that nearly didn’t happen!); and what a year it’s been, eh? If any of you had approached me last New Years’ Eve – y’know, back when we could hug each other, gather together in social groups of more than six and be from unlimited households – and said what lay in store in the months and year ahead, I would’ve looked at you gone-out and then laughed uproariously.

It’s no secret that I love the festive period, and having the little man, Jesse, around means that it’s a no-holds-barred fun fest at Underhill Towers; but if I’m being totally honest, this year it’s more relief I feel ,than excitement. I don’t think I’ll be the only one feeling like this either; it’s been a seriously ‘will it or won’t it happen’ scenario as to whether Christmas was actually going to be celebrated in a traditional sense. Clearly the date and day itself would dawn and the religious significance remains unchanged, but the getting together of families was in serious doubt. Thankfully, we now know that we will be able to sit around a table (at home though, not in a restaurant or hotel) and toast the occasion. Let’s all spare a thought though for those who have lost loved ones during the pandemic.

In amongst all the chaos, hurly-burly and madness have been our emotional saviours: our beloved fur-babies. What would we have done without our faithful pets and their unconditional love? I for one (on several occasions), found myself burying my face into feline and canine fur, inhaling deeply, and gaining comfort and calm from the smell. Ziggy, Poppy and Betty thought the extra fuss was superb, and I must admit that I envied their animal ‘ignorance’ of this Covid calamity – which brings me nicely to my main point in this blog: keeping our precious furry family members safe over Christmas, but letting them have treats too 🙂

We humans tend to go completely bonkers pre- and peri-Christmas:

The decorations, the gifts and the food are all pimped-up beyond normal recognition, and we just let ourselves get wrapped up (no pun intended!) in the excitement of it all. The pets of the world don’t give a rats about it all; not one flying fig given! Actually that’s not 100% true; when it comes to the festive feasting, you can bet that Kitty and Pooch are very, very much interested in the proceedings and are at the front of the queue, bowls at the ready.

I wouldn’t blame you for thinking, but PLEASE don’t do it, that your sanity saviour can have anything their marvellous heart’s desire – after all they have been there for you every single moment in this crazy year. So before you rush off to fetch them gourmet this-and-that with bells and whistles on, I’m going to be the party pooper Vet: the voice of reason for you. 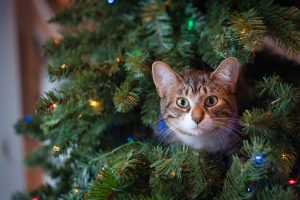 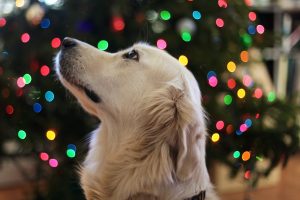 Contrary to our (much wished-for) reality, Christmas food is rich, indulgent and calorie dense: just about everything has extra sugar, cream, butter and alcohol in. I seriously need someone to invent zero calorie food! The turkey (which is basically a super-sized chicken, right?!) not only gets carved and served with its golden, crisped skin still on, but it’s also had butter slathered under said skin and strips of streaky (i.e. the fattiest cut) bacon draped on its breast to keep it juicy and succulent. Feed this skin to Puss or Pooch at your own peril – it’s far too fatty for their digestive systems to cope with: let’s just say that if you cave in and give it to them that you might want to stand down-wind of them for the next few subsequent hours! On a serious note, other than lean (not lipid laden) turkey and chicken, most other festive fowl and meats are just too rich for them and can often cause Pancreatitis – which is jolly painful – if they are overly indulged.

Even though it’s obvious (and is probably the first line in Pet Owning 101!), I will repeat again the mantra sacred to Veterinarians: do not let your pet eat cooked poultry bones; they are very brittle and, if eaten, can splinter inside your furry friend, causing them internal damage which may be fatal to them. Much as the Saint Leonard Veterinary Centre team love our furry and non-furry clients, we have no desire at all to see you in an emergency situation over Yuletide.

Cats and dogs can have a variety of vegetables though, as long as they’re served simply (by that I mean not served with/ in oil, cream or butter). Sprouts, carrot, parsnip and swede are all safe for kitty and fido to eat but moderation is key here, as they’re still relatively calorie rich for them; dogs can also enjoy cauliflower, broccoli, green beans, peas and spinach. Beware not to let them have onion, garlic or leeks though as all of these Allium family veggies can cause Anaemia.

As well as chocolate (which is highly toxic to puss and pooch thanks to the Theobromine it contains) there are two other big no-no’s for our beloved companions: nuts and grapes. In general, nuts are high in fats which as I’ve already mentioned, isn’t great for your pet, and they also don’t bring a lot, nutritionally speaking, to the bowl. Specifically though, Macadamia and Walnuts are toxic to cats and dogs, causing lethargy, vomiting, hyperthermia and tremors. A special eye needs to be kept for cakes, puddings and mince pies containing currants, raisins and sultanas; these are dried grapes, which are highly poisonous to canines and felines, and in severe cases can cause complete Kidney failure and be fatal.

If you want to spread the festive love and joy to your treasured pet (which of course you do :-), then why not give them treats made by your own fair hand? There are masses of recipes on the internet, but I found a couple of simple-but-tasty ones (that even I managed to make!) on the RSPCA website: www.rspca.org.uk – the cat treats are salmon based, the dog biscuits are titled ‘Honey and Banana’ but actually use Peanut Butter and Banana!

Roll up your sleeves, don your pinny and pretend you’re in GBBO for the benefit of your pet!

To get started, pre-heat the oven to 180 Celsius/ gas mark 4; it can get nice and toasty whilst you pop all the ingredients (I love the sling-it-all-in approach) into a mixing bowl, combining them to form a dough texture. Fido’s treats are made with 1 cup whole-wheat flour, ½ cup smooth Peanut Butter, ¼ cup mashed banana and ¼ cup vegetable stock; for kitty’s nibbles you’ll need 2 cups whole-wheat flour, 280g salmon and 1 large egg. Once you’ve got a dough, place it on a lightly floured work surface and roll it out to about ¼” / ½ cm thick, then using small cutters of your choice of shape cut the dough and pop the shapes onto an ungreased baking tray. Place the tray into the oven for 18-20 minutes until the yummies are golden brown. Let them totally cool before letting your furry friend have one….. and soak up their adoration! Oooh, all that talk of food has made me feel peckish; best I go and hunt out the biscuit tin! No wait, I’ll have mince pie – it is nearly Christmas after all 🙂

Don’t forget that the SLVC team are only a phone call away if you need us for anything –as always. Until then; stay safe (socially distanced, of course), stay well, and be happy this festive period 🙂