Well, we did it; kicked 2020 to the kerb and ushered in 2021. I trust you all had a lovely festive season, albeit a far from ideal one? The little man, Jesse, kept us on our toes at Underhill Towers – and I include the furry members of the family in this!

We’re now firmly in mid-winter and temperatures are dropping; there’s even been some snow! Some days have been warmer than average; a trend which is with us to stay I suspect, thanks to global warming. A few frosty mornings have caught me off-guard over the years, and each year I find myself cursing at not having topped up with anti-freeze: please tell me I’m not alone in this?

Anti-freeze is a fab invention for us motorists, but it all too often spells tragedy for animals.

Ethylene Glycol (the major component of anti-freeze) is highly poisonous for cats and dogs;

in the body it is metabolised and forms crystals that (very basically) block the Kidneys. This means that toxins cannot be removed from the body, and systemic poisoning occurs; not a pleasant way to end your days.

The problem with ethylene glycol is that it has a sweet taste, making it very attractive to animals that come across it. Wildlife isn’t immune to its charms either; easily ingesting it from spills, drinking it from contaminated puddles, or absorbing it through the pads on their feet, or through fur and skin if they’ve rolled in it. Our domestic pets can fall prey this way too, so always be careful to mop up any spillages up.

Typically at Saint Leonard Veterinary Centre, we would expect to treat more feline cases of anti-freeze poisoning than canine ones; not because it’s more toxic to cats, but more because cats can access open bottles or containers of the liquid on shelves in garages, sheds or storerooms. Cats can jump up to decent heights and scale furniture far better than Fido, which increases their likelihood of coming across the ethylene glycol and ingesting it.

You can buy anti-freeze that has had a ‘bittering’ compound added to it, which lessens its appeal to animals that were fancying a sneaky sip. There are also anti-freeze solutions available that contain propylene glycol rather than ethylene glycol: this small change in chemical structure makes a big difference in terms of lethal potential. Veterinary treatment will still be needed, but kitty or pooch’s chances of survival are much better – especially if we treat them quickly. 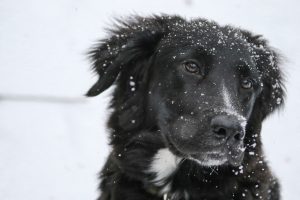 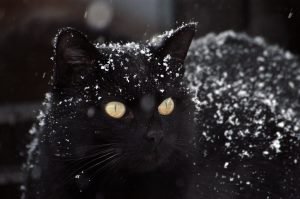 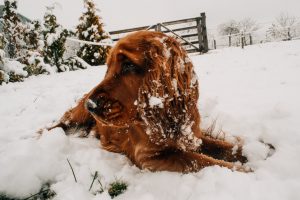 A small amount of concentrated standard anti-freeze can produce symptoms within just 1 hour, typically: depression/lethargy, wobbly/uncoordinated movement, vomiting, and increased/excessive thirst and urination (an early sign of anti-freeze toxicity). Progressing on a timeline, you may see muscular tremors or twitching, drooling/increased salivation, and a decreased output of urine after 12-24 hours as kidney failure sets in. Finally, urine production ceases and seizures are often seen, with death unfortunately inevitable.

I cannot stress this point enough: if you think your pet has ingested anti-freeze, please call the SLVC team as soon as possible! There are drugs available to combat ethylene glycol, but they’re only effective if we give them prior to the (irreversible) kidney damage occurring.

If we suspect anti-freeze poisoning we do blood tests and a simple, quick urinalysis to detect if Calcium Oxalate crystals are present. It’s these Calcium deposits that block the kidneys up, so speed really is of the essence if we stand a chance of successfully treating your fur-baby. Intravenous fluids aid hydration and flush toxins out quicker through the kidneys, but it isn’t uncommon to see cats and dogs deteriorate again when this ends.

Unfortunately we then have to consider euthanasia; this is why I said that I can’t stress enough the importance of early treatment enough. Better still, ensure that the anti-freeze is double-contained (the anti-freeze bottle kept within a storage box, for example) and out of the reach of pets and children alike.

Rock salt is another winter hazard. This mix of Sodium Chloride (salt) and grit poses a danger to your pet if they lick it from their fur or paws. Even ingesting a relatively small quantity of pure salt is dangerous to furry family members; the resulting increase in blood sodium levels leads to increased thirst, vomiting and lethargy. Severe cases may lead to convulsions and kidney damage, and veterinary treatment depends on the concentration of sodium in the bloodstream. Whenever your cat or dog has been out in icy weather, please take a minute to wash and wipe their paws.

The final potential hazard I’d like to point out today is Rodenticides, used to eliminate unwanted rats or mice that commonly come in from the cold to shelter in our homes and gardens. These products commonly contain anti-coagulants (prevent blood from clotting) and if pooch or kitty eat them they can be life-threatening. Clinical signs can be seen between 1-7 days after ingestion has occurred and may include lethargy, increased or laboured breathing, lack of appetite, pale gums, and blood in their faeces (poo). We Vets get particularly alarmed at the presence of black, tar-like faeces as this indicates internal bleeding may have happened (or still is). An antidote to the anti-coagulant agent will be given, and we may have to give a transfusion of whole blood or plasma in extremely severe cases.

Sorry to start the year as a bit of a ‘David Downer’, but i am a firm believer in prevention being better than cure, and we are in a season where these chemicals are commonly about and being used. Don’t fret though; help is always at hand at Saint Leonard Veterinary Centre, just get in touch.

Until next time; stay (Covid) safe, stay well, and be happy:-)