Summer’s here, the suns out, and I’ve just been for a lovely walk with the dogs. I wondered as I wandered, as you do, whether they ever get bored of their walks? They seem to enjoy them, sniffing every second blade of grass and alternating between steady mooching and flat out bounding through the woods and fields, leaping and playing, before slowing down to a saunter again and resuming their scent-finding. But occasionally I wonder whether Poppy and Betty would like to try something new, something a little different…

What’s dog agility all about?

Dog agility is about more than just a form of exercise beyond the usual walks. It’s great for mental stimulation and bonding, too. You can choose to do it competitively or just for fun and it’s a brilliant way to strengthen your relationship and spend some time together. It’s very good for socialisation – your dog can meet other dogs and get used to being around them (and you might make some friends, too!).

You’ve probably seen dog agility at Crufts (where it was first introduced in 1978 and has been a fan’s favourite ever since). It involves a dog jumping, weaving and running around a course, directed by its owner. It’s a measure of the dog’s fitness and athletic ability as well as the owner’s ability to handle and direct them around the course. They run through tunnels, jump over fences, weave through poles with the aim of following a pre-determined course around the obstacles in the quickest time. But it doesn’t have to be a race! If competing isn’t really your scene – or, importantly, your dog’s – then you can do it just for fun, enjoying all the benefits with none of the pressure.

The Kennel Club describe dog agility as ‘an action-packed rollercoaster of excitement for you and your dog’. Sounds good, right?

Sounds fun, but do dogs really enjoy it? 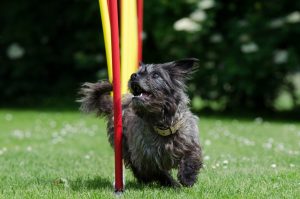 Well, the evidence suggests that yes, they really do! Of course, like anything, agility can be taken to extremes and that’s when it ceases being fun but, if you’re considerate to your dog and its individual nature, then you can both enjoy it. Train with positive reinforcement such as treats, toys or praise and be aware of your dog’s physical limits as well as their like and dislikes. It may be that they thrive on the excitement of a competition and, if that’s the case, then go for it – but if they don’t, if the training stops being fun or they’re scared of crowds or new situations, then just keep it at a recreational level where the enjoyment’s there for both of you.

Is dog agility suitable for all dogs?

As mentioned, it’s important to consider your dog’s temperament – if they’re a sociable character who’s curious, eager to learn, likes to run and is up for trying new things, then it’s likely that agility will be right up their street. That said, it’s not for everyone. If your dog’s more cautious, timid or not particularly active then perhaps it’s not going to be their cup of tea. Likewise, if they have a history of health problems especially breathing difficulties, heart problems or arthritis then trying a new physically demanding pastime really isn’t advisable. However, it can be good for dogs who’ve previously struggled with behavioural issues – a combination of keeping their brain active, the discipline of learning new tricks and commands, and the strengthening of the bond between the dog and owner can really help to combat problematic behaviour.

Dogs can’t compete in agility until they’re 18-months old but they can start training from when they’re fully grown, which can be around 12-months depending on the breed. It’s important not to start them too young, especially larger breeds, because all that running and jumping can impact their growth and damage their joints. Dogs are usually at their peak for competitive agility between 4 – 6 years old but that’s not to say older dogs can’t enjoy it, you just need to be mindful of their level of health and fitness and perhaps keep training sessions shorter.

In terms of their breed, they don’t have to be a collie or a super-springy spaniel to take part in agility but having some athletic inclination will help. It’s probably one to avoid for short-nosed breeds such as pugs that can suffer from breathing difficulties. Even toy breeds can enjoy it (although bear in mind that they’ll have to have an adapted course – they’re not going to be leaping the same jumps as an Alsatian!). If you’re looking to compete, some breeds will be more suited to agility and therefore are more likely to score the faster times (unsurprisingly, 95% of the large breed winners at Crufts are collies) but if it’s just for fun then most breeds will be able to gain enjoyment from the sport in some capacity.

How to get started…

If you want to have a little go at home, you can make a DIY course in the garden with makeshift jumps (this could just be a log to leap over), hula hoops or a child’s play tunnel, to see if you dog’s up for the challenge. Let them investigate the course first and then encourage them round with their favourite toy or treats. Have a look on YouTube for some beginner’s tips and ideas. They’ll need lots of praise and encouragement – especially when going into a tunnel which could spark their fear of the unknown. Don’t be disheartened if they don’t manage it at first, you’re asking them to do something totally new so it might take a bit of getting used to! Keep it fun and don’t get impatient – if your dog senses that it’s making you anxious or angry it’ll put them off altogether. Dogs inherently want to please so, if they’re being praised for what they’re doing, they’ll be keen to do more.

If you’ve both enjoyed your little foray into the world of agility and your dog seems interested and willing to learn, look for an agility club near you (try Agilitynet for a list of clubs and trainers) but be sure to check out reviews and recommendations. You might want to take your dog along to observe first of all so that they can get used to the environment before being asked to participate.

All in all, agility is a great way to keep your dog fit and their brain active and it’s a really nice activity, beyond the usual walks, that you can both enjoy together. You’ll find it strengthens your bond as you and your furry friend take to the course and become a dynamic duo ready to tackle any obstacles in your way!