Ahhhh, I’m finally back at Underhill Towers after a loooong day and I’m desperate to put my feet up! I could just close my eyes and have a little snooze … but, with the little man wanting to play and the dogs needing a walk, there’s no chance of a cat nap. I have to admit, I’m a little jealous of Ziggy right now, all curled up and cosy by the fire. What is it about this time of year that makes us want to snuggle up and take a nap? Maybe it’s the lack of daylight? The dark evenings always make it feel later than it is. It seems like there are fewer hours in the day – as soon as the daylight’s gone our brains think it must be bedtime!

With busy lives, we humans rarely have the opportunity for a cheeky little daytime kip, and if we do it feels very indulgent. Animals on the other hand… well, they really value the importance of sleep. Granted, they don’t have work to do, bills to pay, housework to take care of etc. but nevertheless, taking a nap is always high up on their agenda.

So, why do our pets sleep so much? Let’s start with the kitties. Their sleeping habits have, after all, caused us to coin the well-known phrase ‘cat nap’…

How much do cats sleep? 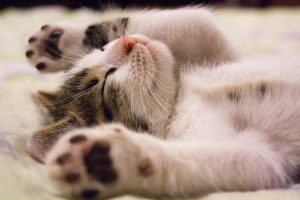 On average, cats can doze for up to 15 hours a day … although it can be as much as 20! Their need to nap varies throughout their lives. When you first get your little feline fluff ball they can cause chaos in the house – chasing, playing and climbing everything in sight. But, thankfully, their bursts of energy are short-lived and you can enjoy a few moments of calm to put your house back together while they have a little snooze as kittens, like babies, need more sleep. Cats then become most active as they approach their ‘teenage’ years (in stark contrast to human teenagers!) before slowing down a bit and needing more frequent naps as they get more senior.

The reason for their sleeping habits is genetically programmed. They may not need to hunt for their food anymore, since they’ve got lovely owners who’ll kindly provide it for them, but their instincts are telling them otherwise. Your furry feline friend feels the need to recharge their batteries so that they’re ready to prowl and pounce whenever they’re required to chase down their next meal (yes, you and I know it’s only in the cupboard, but their pre-programming hasn’t caught up to that yet!).

You might have noticed (somewhat annoyingly) that Kitty is wide awake and ready to play at the times when you’re feeling least like it. This is due to cats’ crepuscular nature, meaning they’re most active at dawn and dusk. Again, this goes back to their hunting ancestry – these times are better for catching prey as they can hide in the shadows as night falls or before the sun comes up. They may also vary their sleeping habits with the seasons or the weather. If it’s rainy outside and not really fit for exploring they may spend a bit more time dozing instead. Well, why wouldn’t you?

Kitty probably has a favourite spot for sleeping, somewhere warm and cosy, although this can change throughout the day – cats are good at seeking out the warmth and will move depending on where the sun is or whether the heating’s on. It always feels like an honour if your cat chooses your lap for their nominated snuggle spot, and it’s a great excuse not to move for a while … I mean, you couldn’t possibly disturb your furry friend, could you!

Let sleeping dogs lie … but how much sleep does your dog need?

Adult dogs generally sleep for around 12-14 hours per day but this can vary by breed, with larger breeds favouring up to 18 hours of kip! In addition, a further 30% of Fido’s day could be spent ‘resting’ with just the remaining few hours being active. It’s a dog’s life!

But, your canine companion isn’t just being lazy. Like their feline counterparts, it’s their genetic coding that tells them only to expend energy when needed, and to keep well-rested just in case. Like kittens, puppies sleep more – they’re all or nothing so one minute they’re charging around the house like an unstoppable ball of energy and then, literally the next moment, they can be flat out! Stimulation is exhausting for your pup so they can also sleep for around 18 hours every day. It may seem excessive, but they need plenty of kip for growth and development.

Like cats, dogs will be happy to sleep almost anywhere, often favouring the same places that you like to snooze – whether they’re allowed to or not! How many times have you caught Fido snuggled up on your pillow or flat on his back with his legs in the air stretched out over the full length of the sofa?! While dogs like to make the most of any comfy spot they can find in the house, it’s still important for your four-legged friend to have their own bed, too – somewhere they know is their safe space where they can take themselves off for an undisturbed kip if they’re feeling particularly tired or overwhelmed.

While dogs (and cats) may need a lot of sleep they rarely do it all at once, choosing instead to take shorter, regular naps throughout the day. Some of this time will be spent in deep sleep (you’ve probably watched their tails twitching and feet running while they dream) while other naps are lighter – they’ll often open one eye from time to time just to check they’re not missing out on anything.

Although popular pets for children, hamsters are nocturnal – meaning they sleep mostly in the day and are at their most active during the night. Always bear this in mind when you’re choosing a location for Hammy’s cage at home. They’re likely to put in a few shifts on their squeaky hamster wheel during the night so, unless your kid is a particularly deep sleeper, children’s bedrooms aren’t the ideal place for them to live! Respect their natural sleeping patterns – unless they’re already awake and active, don’t get them up for play during the day. Disturbing their slumber can be very unsettling and may cause defensive aggression. We all know that it’s not nice to be woken suddenly – I mean, I wouldn’t rule out a bit of hostility and potentially giving you a nasty nip if you dragged me out of bed and put me in a big plastic ball to run around in! You’ll probably find that Hammy’s more active at dusk so you could enjoy some time bonding and playing together before your child goes to bed.

Rabbits, like cats, are crepuscular – so they’re wide awake and ready for action at dawn and dusk. Again, try to tie in playtimes and cage cleaning to suit their natural rhythm rather than expecting Thumper to wake to fit in with your schedule. While some bunnies will adapt to their home environment and your daily rhythms to develop more ‘sociable’ playtimes, for others their genetic programming will be stronger and trying to alter their internal alarm clock could cause them to be

very unsettled and unhappy (resisting the urge to say ‘unhoppy’ … there’s a time and a place for my dad jokes!).

When should you worry about your pet’s sleeping habits?

The time to be concerned about your pet’s snoozing is if it suddenly changes. While I’ve suggested some average sleeping times, these aren’t a rule of thumb and all animals will be different. Just like people, some individual pets need more sleep while others will quite happily function with less. So, if you dog’s only ever taken short naps or if your cat has always snoozed for the majority of the day, then that’s fine. However, if your furry friend seems suddenly very sleepy or is hard to rouse – or, if they can’t seem to settle and are struggling to catch a few zeds, then that’s the time to see your vet. As with humans, changes to sleeping patterns can be symptomatic of other health issues including pain, discomfort, infection, digestive problems or even anxiety or depression so make an appointment with your vet and be sure to mention the changes to their sleeping habits as this could be really useful information in helping with a diagnosis.

Right, I’m off to work through my list of evening jobs before my head can hit the pillow. In my next life I’m definitely coming back as a cat! Sweet dreams.