Kings and Queens of the Feline World.

Having shone the spotlight on Man’s Best Friend (much to my Betty and Poppy’s delight), I thought I’d better balance it out by celebrating the stars of the cat kingdom; I can’t have Ziggy-puss upset, can I? All felines are fantastic, so please don’t be upset that the Exotic Shorthair, Scottish Fold and Ragamuffin haven’t got special mentions.

Cats have been popular as pets far back in history, and two of the oldest breeds are the Egyptian Mau and the Japanese Bobtail. Egyptian Mau’s are the closest relations to those cats depicted as Pharaoh’s companions and are very expressive and intelligent, with a fluid grace to their movement. Japanese Bobtails are also very vocally expressive and love nothing more than being active or getting attention. This breeds name comes from its rabbit-like stubby ‘bob’ of a tail, which resembles a furry pom-pom – cute or what?!

Another cute thing is pictures of fluffy Persian kittens; they are literally chocolate box delicious. Persians are friendly, quiet natured kitties, and it’s just as well that their personality is low-maintenance because their long, luxurious fur most certainly isn’t! Expect to factor in daily grooming sessions for your feline friend if you become the kitty-mama or papa to one of these beauties. 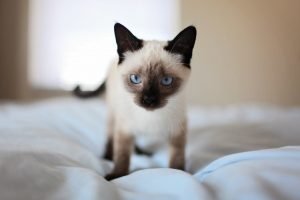 Equally beautiful, but far easier to groom, are the Burmese and Siamese breeds. Both of these cat breeds have hypnotic, bright eyes – especially the Siamese’s intense blue ones. The Siamese is renowned for being very vocal as well as being highly inquisitive, something else the two breeds share (as well as their short coats).

Coming closer to home (the Isle of Man, to be precise), we have the unmistakeable ‘Manx’ cat. This puss has no tail at all, not even a cute button like the Japanese Bobtail; hence they sometimes get called ‘rumpies’ or ‘stubbins’. Another odd feature they have is that their hind legs are longer than their front ones, which gives them a distinctive ‘hop’ to their walk. This breed has a gentle, but playful, nature that makes them good company; and if they happen to like you then you’ll be welcomed home with their characteristic high-pitched ‘chatter’ sound. The Manx also has a double coat, something they share with the Russian Blue that I’ll mention later. 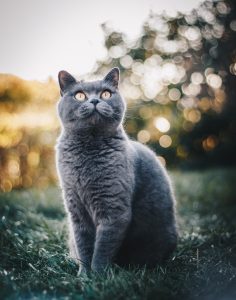 Staying on home territory, the British Shorthair (BSH) is another ‘top cat’ and comes in a variety of colours and patterns, with the favourite choice being Blue – commonly called ‘British Blues’. This breed is wonderfully relaxed in nature and forms good bonds with its human minions! Whilst they like nothing more than a ‘couch cuddle’ the BSH doesn’t enjoy being picked up and carried. Curiosity is one of this fab felines dominant traits and they’ll follow you around wherever you go so that they don’t miss out on anything J. British Shorthairs are a particular favourite of mine and I’m clearly not alone: two iconic BSH’s are ‘Puss in Boots’ and Alice in Wonderland’s ‘Cheshire Cat’.

Standing out from the kitty crowd is the Havana Brown breed. This cat is the only totally brown kitty, including their cute snozz’s and paw pads; no pink to be spied at all anywhere on them: zip, zilch, nada. When I say brown though, I don’t mean a run-of-the-mill mucky puddle or earth toned brown; oh no, this is a rich, deep hue that looks like the softest velvet. It isn’t just their fur that’s gorgeous – their hearts are too. You couldn’t wish to find a more personable puss than a Havana Brown. If they have one fault, it’s that they really are too trusting, so if you’re lucky enough to have one then take extra care around their safety. A kitty this good is highly desirable to others, so keep them close.

If it’s a seriously stunning cat you’re after, look no further than the beautiful Bengal. This feline takes its name from the tiger it’s bred to resemble; one of the bloodlines used historically in Bengal cat breeding is the Asian Jungle Cat, which gives rise to its distinctive markings. Whilst it may be wilder in looks, this breed is definitely domesticated – though its gregarious personality may make you think otherwise at times!

Although at first glance the Dragon Li may resemble the humble tabby cat, its impressive heritage sets it apart. Believed to descend from mountain cats, the Dragon Li is very popular as a pet in China, thanks to its docile temperament. Keenly intelligent, this particular kitty is a hunter ‘par excellence’ when it comes to mice so it is a great furry member of families in both rural and urban settings.

The Russian Blue is an extremely handsome puss with a short, dense double coat – no doubt in homage to its homeland, Russia, and the colder climate there. This breed comes in just three colours: Blue, Black and White, have the most mesmerising Emerald green eyes, and seem to be always smiling, so no wonder they’re in demand. Known as a ‘gentleman’ amongst cat breeds as recognition of its superb temperament, the Russian Blue makes a great pet for families with children and forms a strong bond with its owners.

If there was a beauty contest for kitties, this puss would win it – paws down! With its regal air and stunning coat, what’s not to love about the Somali breed (sometimes called Long-Haired Abyssinian’s)? The Somali is nick-named ‘Fox Cat’ not just because of its fox/feline hybrid looks but also because of its mischievous and playful nature.

Just as the Somali cat is called the Long-Haired Abyssinian, so you could call the ‘Abys’ a Short-Haired Somali! This puss forms good bonds with its humans and likes being active. One thing worth noting is that this breed may suffer from Pyruvate Kinase Deficiency: an inherited disease that may cause Anaemia. Reputable breeders should test for this, so enquire about this if you’re thinking of getting one.

If you have allergies but are eager to have a cat as a companion, there may be two ‘haute couture’ kitties worth considering: the Sphynx and the Cornish Rex. 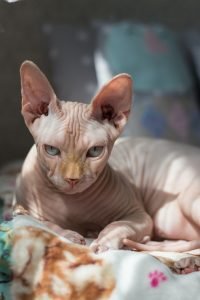 No doubt some of you will have seen images of the ‘bald’ Sphynx cat, and they do tend to have a Marmite effect: you either love them, or you don’t! The Sphynx isn’t entirely hairless; its body is covered with a peach-fuzz, downy hair. You can’t miss this moggy’s ears either thanks to their generous size, and they’re a vocal breed too; yep, what they lack in fur, they make up for in other ways.

The Cornish Rex is also a great option for allergy sufferers as it doesn’t shed its short hairs and produces minimal dander. One distinctive feature of this Siamese-related breed is its curly fur which lots of people love – and they also love this feline’s fun-loving nature. Cornish Rex’s aren’t shrinking violets by any stretch of the imagination; they’re extremely inquisitive and never tire of getting attention.

Sometimes bigger is better; at least that’s what the Maine Coon cat would say! This breed is head-and-shoulders (sometimes literally) above other cat breeds, being the largest domestic cat around. This friendly feline giant needs daily grooming of its coat, which is long and thick, but with it being such a sociable puss the Maine Coon will love the extra 1-on-1 time with its human.

So there you have it; some of the more striking members of the feline family. Looks aren’t everything (as we know) – as long as you love your puss and they love you, that’s all that matters. Keep your moggy ‘feline’ fine and in ‘purr-fect’ condition by staying up-to-date with all their vaccinations and flea & worm treatments; just give the Saint Leonard Veterinary Centre team a call and we’ll get you booked in as soon as possible.

Before I sign off, I just want to give a special mention to Bob of ‘A Street Cat Named Bob’ fame who sadly passed away on 15th June aged at least 14 years. Bob and his human, James, really did represent the bond with cat and man wonderfully. R.I.P Bob.

Until next time; stay safe (and socially distanced), stay well, and be happy 🙂