During a few minutes’ downtime the other day I was having a quick scroll through social media on my phone, as you do, and it suddenly struck me that amongst the ‘people you may know’ and ‘recommended follows’ were a great number of pets. Well, I do know a lot of pets, probably many more than the average person due to my line of work, but I usually see them in the surgery, not on social media. It’s a development that has somehow passed me by if I’m honest but, once I’d noticed it, I couldn’t help but see them everywhere … so, I began to do a little digging!

Before you ask me if I’ve been living under a rock for the past decade or so, yes, I’m fully aware that there are lots of animals pictures and videos on the internet and on social media – I’m as guilty as the next person of falling down the rabbit hole of watching endless cat videos on YouTube (some of them are hilarious) and I really love to see pictures of people’s pets when they’re shared on their owners accounts – but I’d not quite registered the trend of pets actually having their own personal social media accounts, a ‘voice’ and identity of their own, if you like. 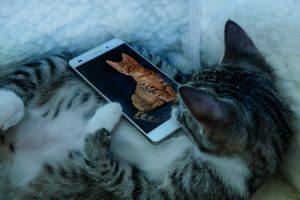 Well, it would appear that my head has well and truly been in the sand when it comes to this! I was flabbergasted (and I don’t use that word often) about the sheer numbers of pets with their ‘own’ social media accounts (as a vet I have yet to encounter one who’s capable of actually using a smart phone, let alone creating their own online identity). According to a recent survey by Asda Money one in four pet owners had created social media profiles for their pets! The reasons the owners gave for this ranged from ‘to avoid spamming my personal account with pet photos’ (totally understandable, who can resist taking cute pics of their beloved fur balls?) to ‘it’s a way to keep all the photos of my pet in one place’ (again, I get this; my camera roll is a jumbled mess of all sorts of random photos!). However, a quarter admitted that the reason they’d created their pet profiles was in the hope that their pet would become an ‘animal influencer’.

Now, I don’t want to show my age here, but ‘influencers’ are a relatively recent phenomenon. Wow, what an industry that has become in just a few years! I was astounded when I discovered that not only could ‘being an influencer’ be a genuine career nowadays, but it’s an incredibly lucrative one at that. And, it would appear that it’s not just limited to humans. There are some very famous pet influencers who are not only making names for themselves and garnering a huge following of fans on platforms such as Instagram, TikTok and You Tube, but they’re also raking in the money for their owners, too.

In the UK, some of the top pet accounts include:

However, when we start to look globally, the figures are even more astonishing!

@jiffpom is a world famous Pomeranian with a staggering 9.7million followers and no less than 3 Guinness World Records! Jiffpom is famed for his cute looks and teddy bear fur, and is followed by the likes of Ariana Grande and Katy Perry (he even starred in one of her music videos).

@itsdougthepug, a pug who’s famed for comical posts, has 3.7 million followers including Ed Sheeran, Justin Bieber and John Legend amongst others. Doug is the proud winner of 2 people’s choice awards!

@nala_cat is a Siamese tabby mix and, with 2.6 million followers, holds the Guinness World Record for the most popular cat on Instagram, while @realgrumpycat, one of the ‘original’ cat influencers, has over 2.6 million followers and an estimated net worth over $1 million.

Through posts, sponsorship, merchandise, YouTube channels and even acting roles or public appearances, these pets make a fortune for their owners. And there lies the bit that makes me feel slightly uncomfortable with the whole ‘pet influencer’ thing. Where do owners draw the line between what’s right for the pet and what’s going to boost their bank balance the most? The animals don’t really get a lot of say in their newly acquired role and what may have begun with a few candid snaps and posting some cute photos can soon become endless photoshoots, dressing up and manipulating their actions and behaviour in the pursuit of original content and the likes, follows and income that it brings.

In my research, I also came across some ‘advice’ articles aimed at wannabe influencers which stated ‘Want more followers? Get a pet!’ this really set alarm bells ringing – animals shouldn’t be treated as commodities and the idea that someone would get a pet simply to boost their online profile is abhorrent. It’s a world away from genuine animal lovers who just can’t resist oversharing their cute pet pics.

As ever, when fame and money’s involved, especially the huge sums we’re apparently talking about here, waters become muddied and good judgement and morals can sadly fall by the wayside.

Now, I’m not saying people shouldn’t put their pet pictures online – not at all. I love seeing photos of people’s pets, but mostly I enjoy seeing them displaying their own character, being cute, funny, mischievous, and doing what animals do in the right environment. I don’t particularly enjoy seeing animals being dressed up or enduring endless photo shoots in spotless studios because that’s what the sponsors want. Give me muddy paws any day!

Another problem with a high public profile (and eye-watering net worth) is the risk of pet-napping. There are sadly unscrupulous people out there who see a pet’s fame and fortune as a way to make some money themselves – Lady Gaga’s dogs were recently stolen (and her dog walker was shot during the incident) but returned unharmed when the singer offered a $500,000 reward. A cat or dog that’s famous the world over and makes millions for its owners is unfortunately bound to attract the wrong kind of attention as well as the right kind.

So, as much as I love seeing pictures of people’s pets online, I’d warn anyone to just be wary of how far this goes. If your pet has a certain characteristic, skill or habit that you think the world would love to see then, go ahead, share away – you’ll probably make a lot of people very happy. You might even be lucky enough to attract some interest and get a few freebies along the way, like cat toys or dog treats. But, if the pursuit of unique content starts to affect what you do with your pet and the

way you treat them, then maybe it’s time to step away from social media for a while. When you begin prioritising a photoshoot over a nice long walk with Fido, avoiding fields for fear of getting dirty, or coaxing an unwilling Kitty out of a hiding place in order to take snaps … then it’s no longer in your pet’s best interest.

Another word of warning … just be careful about what’s on the photos that you share. I’ve spotted one or two where the owner’s telephone number is clearly displayed on a dog’s collar so, unless you’re happy to have your personal details out there, make sure you double check the pic before you post!

I’m off to have a chat with Ziggy, Poppy and Betty to see if they’ve heard of any of these ‘pet influencers’ and whether, indeed, they’ve been influenced! I mean, who knows what they get up to while I’m at work…