When I was in the supermarket the other day, I couldn’t help but overhear a conversation between two ladies in the queue about their online dating experiences. Now, I’m not usually in the habit of eavesdropping but my ears pricked up at the mention of dogs so naturally, my veterinarian spidey senses took over and I unwittingly tuned into their conversation. It transpired that one of these ladies had used a dating site specifically for dog owners! I didn’t get to hear the whole conversation as the cashier was being annoyingly efficient at that moment and I had to leave (otherwise I’d have looked incredibly suspicious, lurking around the tills to hear more about this lady’s love life!) but I couldn’t help but follow this up when I got home.

Before googling ‘dating for dog owners’ I did explain the situation to Mrs Underhill, as that would no doubt raise some eyebrows at Underhill Towers if it popped up on my search history! As it goes, Mrs Underhill was as intrigued as I was, so I set about doing some research into the world of dating with pets…

Do Pets Make You More Attractive? 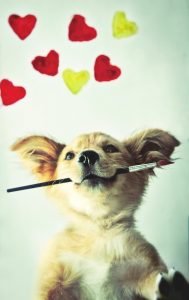 It turns out that there have been a number of surveys done on pets and dating, with one from Elite Singles suggesting that over half of singles think owning a pet can make someone more attractive – with dog ownership at the top of this list. In the same survey, 63% of people said that having a pet in your profile picture boosts attractiveness while a 71% like the idea of mentioning a pet or love of animals in a dating profile. Interestingly, only 12% of people said this would be a turn off (the remaining 17% were indifferent). So, apparently we really are a nation of animal lovers! Seeing a potential partner being affectionate towards a pet is said to demonstrate how they’ll be in a relationship – with 72% of those surveyed saying that the way someone treats a pet can predict how caring they are.

The survey didn’t stop there! It delved into dating with pets too – and, on that front, it appears we’re a bit contradictory. 62% of people said it would be a ‘distraction’ to take a pet on a first date, although the other 38% thought it would be ‘charming’ … so, I guess it’s all about finding your kind of person. Which brings me back to the conversation I overheard…

And, my research discovered that there are indeed dating sites aimed specifically at pet owners, helping pet-loving singles to find someone who’s on their wavelength when it comes to their love of animals. It really makes sense – your pet is a big part of your life, so you want a partner who’s willing to share this with you and love your pet as much as you do!

Dating sites or apps for dog owners include ‘Dig’, which is known as ‘The dog person’s dating app’ and allows you to find someone who owns a dog, someone who loves dogs but doesn’t own one (ideal if you have a slightly antisocial four-legged friend) and even filter by size of dog! Another site, ‘Dog Lovers Dating’ does exactly what it says on the tin and connects singles with other dog lovers in the UK, while ‘Fetch Me A Date’ is said to be an ‘online community of members who love dogs and are looking for a like-minded dog lover to share their life with.’ The website Thebark.com claims that ‘multiple scientific studies’ have concluded that dogs ‘enhance human attractiveness’, explaining that people are more attentive and socially engaged with those who are accompanied by a dog. It cites one such study, which experimented with a man’s success in using the same chat up line on 240 women – 120 times when accompanied by a dog and 120 times without (my first thought here was ‘Wow, that must’ve been exhausting!’ and my second was ‘Where on earth was he standing to bump into 240 women?!? But, who am I to argue with ‘science’!) Anyway, the results showed a 9.2% success rate without the dog and 28.3% with! So, the same line was 3 times more likely to work when he had his faithful friend in tow. Now, you may be thinking ‘Hmm, it wasn’t you those ladies were interested in – it was the cute pup!’ and you might be right! Scientists did suggest that the rush of oxytocin that dog lovers experience when in the presence of a dog may cause them to transfer those warm and fuzzy feelings to the accompanying human. So, the moral of the story for singletons is to make sure you’ve fallen for the person holding the lead and not just the cute four-legged fur ball on the end of it!

But it’s not just the dog-lovers who have their own specific dating sites – cat lovers can find their perfect moggy-loving match too, on sites such as Tabby Dates … and it appears that this may be the way to go for people who really love cats, as a survey in America showed that on general dating sites men in particular get fewer matches if they have a cat in their profile picture and, in contrast to the ‘dog effect’, this study showed men holding cats were viewed as ‘less dateable’, ‘less extrovert’ and ‘less masculine’! It’s worth noting though that this was a general result – those who identified as ‘cat people’ did find the men with cats more attractive. So, it’s all about finding your people.

Once you’ve met that perfect partner, it’s important that you know where you stand. And, for one in three dog lovers that place is – you’ve guessed it – behind the dog! Yes, that’s right – yet another survey concluded that a third of dog owners would pick their pet over their partner while 40% admitted to giving their four-legged friend more affection! It appears the puppy love is mutual though – with 42% admitting that their dog intervenes when their partner gives them a hug.

The same poll also found that dogs are responsible for 3 disagreements a week in British households, with 1/8th of those surveyed admitting that they’ve been given the ultimatum ‘It’s me or the dog’. Top tips to avoid these pet-based fall outs include sharing pet care duties equally (especially the less pleasant ones such as clearing up poo or walking in the rain), establishing boundaries (is the dog allowed on the bed or the furniture?) and discussing budgets for pet expenses (You spent HOW MUCH on a designer coat for the dog?!?).

So, we’ve established that pets can play a key role in helping people to meet their perfect, like-minded, animal loving partner. We’ve also established that they need to be happy to play second fiddle to the aforementioned pet! And, that the pet may be the cause of some friction from time to time in the relationship if you’re not on the same page with all things animal care related. But, even if you iron out those little issues, sometimes relationships can go wrong (through no fault of the pet!). On a serious note, it really is worth considering what would happen to your pet in this eventuality. Ant McPartlin and Johnny Depp are amongst famous names who’ve had custody battles over their pets when their relationships ended and it’s not nice for all involved. The Blue Cross take

in on average 4 pets a week following relationship breakdowns, which is why they partnered with divorce lawyers Lloyd Platt & Company to create a free ‘Pet Nup’ document. Much like a pre-nuptial agreement, the Pet Nup sets out the rights of pet ownership and the responsibility of ongoing pet care in the event of a divorce or relationship breakdown, to help take the conflict out of a difficult and emotional situation.

So there we have it! My little eavesdropping experience has taken me full circle from whether pets make you more attractive to what happens to animals in the event of a divorce. I might go and loiter round the tills again so I can tell those ladies everything I’ve discovered during my research into pets and dating!

I’d say my three top tips from this are:

1 – Find someone who genuinely shares your love of animals and if this is via a pet dating site then so be it.

2 – Make sure you fall for the person and not just the pet!

3 – Establish who’ll take care of the pet if the relationship doesn’t go the distance. You don’t want to be caught up in a pet custody battle.

Now I’m off to pour a glass of wine and curl up on the sofa with all the loves of my life – the human and animal ones (and reassure Mrs Underhill once again that my strange Googling was purely in the name of blog research!).