Brrrr! It’s been a bit chilly lately, hasn’t it!

Hands up who’s already fed up with defrosting their car every morning? While we’re beginning to see very early signs that spring is on its way, with evenings getting slowly but surely a little lighter and green shoots starting to peep through the soil, this weather is certainly reminding us that we’re still well and truly in the grip of winter for now.

We’ve been treated to an awful lot of frost and ice lately and I’m fairly sure there’ll be more of the white stuff coming down before winter finally departs – as we know from past years’ experience, snow can come at any time and it’s certainly not unheard of well into March or April. Some people absolutely love the snow, while others can’t stand it. I must admit, I have a bit of a love/hate relationship with it! It makes everywhere look beautiful, there’s no denying that. There’s something really magical about looking out the window onto a snowy landscape. And, snow can be lots of fun! Jesse and I have had hours of fun playing in the snow – sledging, building snowmen, making snow angels. In hindsight the snowball fight was taking it a bit far with a toddler but you live and learn…!

But then, there’s the downside… snow causes a great deal of disruption and can make going to work and getting on with your lives very difficult. Getting around in the snow is incredibly tricky, not to mention dangerous, especially for older people or those with limited mobility. I’d quite like it if we could have a decent snowfall on a Sunday afternoon that was just enough to play in for a couple of hours, and then it’d disappear by evening so that normal life could resume. Wishful thinking, eh!

Pets, like people, often tend to either love or loathe the snow. Cats, for the most part, fall into the ‘snow-loathers’ camp! They’re generally keen on staying warm and dry so they’re rarely fans of anything cold and wet, rain and snow included. Dogs, on the other hand, often love a good frolic in the snow – it’s something new to play with! My pets are no exceptions to this… Poppy and Betty tear around in the garden chasing snowballs – and each other – full of glee at this exciting new world that’s appeared out of nowhere, while Ziggy watches suspiciously from the window, occasionally venturing to the back door where she’ll tentatively offer a paw to the strange white covering on the ground before withdrawing back to the warmth and comfort of her cosy cushion. However, if I’ve learnt anything in all my years as a vet it’s that animals don’t always conform to stereotypes… as this compilation video of cats playing in the snow confirms! So, you may have a cat who loves the snow or a dog who hates it, or both! Whichever side of the proverbial snowy fence your pets sit, there are a few things that you need to be aware of as a responsible pet owner in order to keep your furry friends safe throughout the cold, wintry weather… 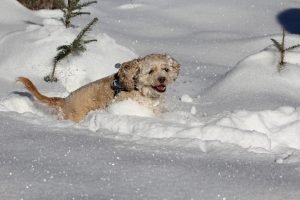 Puppies, like children, can get cold very quickly so, if your pup is experiencing snow for the first time, make sure you don’t overdo it! They may be loving it, but limit snow play to short periods. Even adult dogs can get very cold in the snow and may even suffer from hypothermia, so keep an eye out for any signs of shivering or sudden tiredness. If these appear, get them home quickly and, if you’re worried about your furry friend, seek advice from a vet as quickly as possible. Although they’re not always necessary, some dogs may benefit from a coat in cold weather, especially small, slim, short-haired, very young or old dogs. You could also consider getting them some protection for their feet,

which can get clogged up with snow and ice. This is not only uncomfortable but can lead to cracked pads or, in the worst cases, frostbite. If Fido suddenly stops walking and lifts his paws he may be trying to tell you that his feet are cold and sore.

Ice is another big risk in cold weather. Slippery surfaces can be dangerous for both you and your faithful companion. I have seen and heard of many injuries to both pets and owners caused by walking on icy days. If in doubt, miss the walk out! Your dog won’t suffer from a day without a walk but you both will if you’re unable to walk for weeks because your leg’s in plaster! Likewise, icy lakes and ponds can be very dangerous so make sure your dog is kept on a lead around frozen water. They won’t know that the surface is unsafe but, if thin ice cracks, they could easily become trapped underneath and, as well as the risk of drowning, there’s a real danger of hypothermia setting in very quickly in cold water.

Walking on gritted roads and pavements may reduce the risk of slipping, but it’s not without its problems… grit can be poisonous to dogs if consumed so be sure to thoroughly clean Fido’s feet after you’ve been out so that he can’t lick grit from his paws. Grit can also cause irritation, soreness and cracking to the pads. If you notice this, you may need to pop Fido to the vets for some treatment.

Since wintry weather may curtail some of your pet’s outdoor activities, they could be more at risk of piling on the pounds throughout the colder months (aren’t we all!), so it’s advisable to keep an eye on their portions and adjust accordingly. If Fido’s not walking as far then he probably won’t need quite as much dinner! 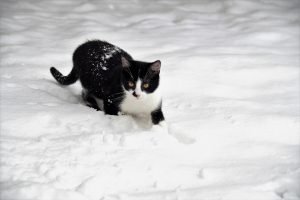 As I’ve said, it’s possible that your cat may wish to hide indoors while the ground is covered in that strange white stuff and, if that’s the case, make sure they’re all set up for a few days inside with a litter tray somewhere easily

accessible. However, if Kitty’s an outdoor cat through and through and is determined to be out there whatever the weather, you need to make sure that there’s somewhere for her to shelter from the cold. Leave the shed door ajar or the window open on an outhouse so she can hide from freezing temperatures without getting trapped. Regularly check the cat flap to make sure it’s not frozen shut so that Kitty can come into the warmth and safety of the house whenever she wants to.

If you’re popping out in the car always check underneath and under the bonnet to make sure your pet, or any other local neighbourhood cats, aren’t hiding there. They’re often attracted by the warmth of the engine (especially if the car’s recently been used) and decide that cars make an ideal cosy spot for a nap … even though they’re not the safest place to sleep!

If Kitty’s decided to explore the great white outdoors, make sure you give her feet a wipe when she gets back in to remove any traces of grit which could be dangerous if she licks it. You also need to be extra careful when using de-icer or antifreeze on your car – clean up any spillages immediately and make sure there are no puddles left on the drive that cats (or any other animal) could drink from as this is highly poisonous. 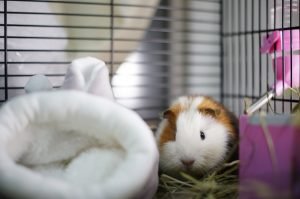 When the temperatures plummet it’s best to move your small animal hutches or cages indoors or at least into a shed, outhouse or garage, to make sure your pets don’t get too cold. If this isn’t possible, you can cover their cages with blankets to keep them insulated (but check on them regularly). Wherever they are, ensure they’ve got plenty of extra bedding when it’s cold so that they can snuggle up to keep warm if necessary. It’s also very important that you keep an eye on their water bottles to make sure they haven’t frozen. Your furry friends will still want to come out for regular exercise so let them have a run or a hop in a supervised safe environment if their usual run is out of bounds (or is hidden under snow!).

All that talk of snow is making me even colder – I think it’s time for a warming cuppa by the fire! Take care, look after yourselves and your pets, and stay warm! Roll on spring…