It’s an image we’ve all grown up with – from greetings cards, to films, to cartoons; a dog chasing a stick is a familiar scene. How many of us have automatically picked up a stick and thrown it for a dog to chase? Dogs love to chase sticks, right? That may be the case, but is it really a good idea to encourage your dog’s stick fetish?

Firstly, let’s have a look at what it is that makes sticks particularly appealing to dogs…

For a start, it’s something they can chase, catch and then tear apart (yes, I know, it sounds a bit grim when you put it like that, but Fido’s ancestors are hunters so, soppy as he may be, he’s still got that instinct in him!). They’re also good for gnawing and chewing on (more on this later…) and they’re fun to chase because they can fly through the air, land and then sometimes bounce back up (again, we’ll come to this shortly). They’re a bit ‘bone-like’ in appearance and there’s an earthy, musty taste to a stick that dogs also seem to enjoy. In short, it’s a tasty, chewy, fun toy that can exercise everything from the mouth to the legs. And, of course, they’re free and readily available – just lying around on the floor, waiting to be played with. Tempting!

So, what’s the problem? They’re just a bit of fun! 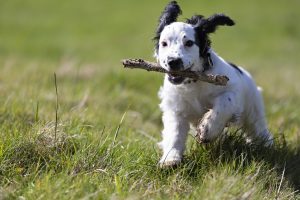 The last thing I’d want to be accused of is being a kill-joy – especially when it comes to animals playing. I honestly love watching a dog having a whale of a time playing, running, rolling, chasing and throwing its head back to toss a toy for itself. Before I had seen the horrors that a stick can cause, I’d probably have encouraged owners to partake in a bit of stick-throwing fun with their pups. But, since becoming a vet and treating more dogs with stick injuries than I’d want to remember, I would strongly advise you, and Fido, to step away from the stick and find a safer toy to play with.

‘Yeah, yeah’ you may think. ‘My dog’s always chased sticks and never had a problem!’ Well, then your dog has been lucky. And it may continue to be lucky. It may live a long and happy stick-chasing life … but there’s also a possibility that the very stick that is the source of much merriment could also sadly be disastrous and, having seen the consequences, I would suggest that’s not a risk worth taking.

Even the seemingly harmless act of chewing a stick and spitting out the wood can cause problems, as sharp splinters can cause puncture wounds in Fido’s mouth. Not only is this painful but it can lead to infection and other complications. Dogs may accidentally inhale part of the stick, which could cause choking or a respiratory tract infection or, if your furry friend swallows pieces of wood, it could cause an obstruction or a perforation in the digestive tract. Any of those scenarios could be very dangerous if not caught and treated quickly.

There’s also the possibility that the stick they’ve picked up isn’t a harmless bit of wood, after all. Sticks can carry toxins, bacteria, funghi, parasites… you name it. It’s been lying around outside on the ground after all, goodness knows what nasties may be festering on there! While dogs are much more hardy than humans in terms of what they can ingest, there’s always the chance that the stick could be harbouring something potentially very harmful that you certainly wouldn’t want to be dishing up for Fido’s dinner (and you should probably wash your hands after handling sticks, too!). In addition to this, wood from certain trees that you may find in parks and gardens (such as wild cherry, yew or maple) can also be poisonous to dogs so, unless you know your trees, picking up an unknown piece of wood could be a bit of a gamble.

But, even prior to the chewing or swallowing, the chasing itself can be hazardous, too. In fact, the worst stick injuries I’ve sadly had to treat have been impalement injuries. When a dog chases a stick they’re full of excitement and glee – they’re running full pelt, fully committed to grabbing the little wooden piece of joy as soon as they can. But, sticks can be unpredictable little blighters. They can hit the ground and bounce back up at a funny angle. They can suddenly get stuck in the ground with their other sharp end pointing skywards.

When you’re running towards something at top speed, neither of those options are going to end well. If a dog is impaled by a stick, the penetration wounds can be catastrophic.

Remember that scene from Braveheart?!

There’s no need to go into the gory detail, I’m sure you can imagine. Suffice to say, you’d only have to see this kind of injury once to stop you ever wanting to throw a stick for a dog again. The same type of injury can occur if a dog’s running with a big stick in its mouth and one end suddenly gets stuck in the ground or caught on something, bringing the game to a sudden and painful halt. Again, there’s no need for me to elaborate on this, I’m sure you get the gist.

Sorry. I feel I’ve brought the mood down a bit today, but sadly stick injuries are a serious issue and something that vets see regularly. What starts out as an enjoyable game can have severe, sadly sometimes fatal, consequences.

However, the last thing I’d want to be is a fun sponge! As I mentioned earlier, one thing I really love is watching dogs play in their inimitable, bouncy, carefree way – and you and your furry friend can still have fun on your walks without sticks. Take a ball or a throwable chew toy – you can even get toys designed to look like sticks to add a bit more authenticity! Whatever you choose, if you ditch the sticks you and your four-legged pal can enjoy your favourite game of fetch much more safely.

Until next time, have fun and take care!