The Hot(test) Dogs in the UK over the last Century.

During the Covid-19 lockdown situation we’ve all found our lives turned upside down; a full-on 180 degree spin that’s seen many changes happen – not least to how and where we’ve been able to exercise. I’m sure that I’m not alone when I say that with the gym/pool/sports club out-of-bounds, I have run and walked more; by proxy this means that my furry girls, Poppy and Betty, are spending more time with me than usual. 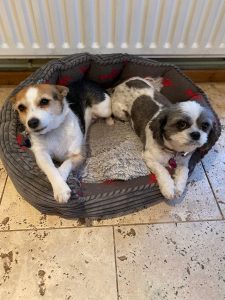 Man’s Best Friend have certainly earned that title – and then some! – during these weeks and months of lock-down. Our four-pawed marvels have been our exercise buddies, children’s entertainers and companions, and a non-judgemental sounding board when it’s all got a bit much. Just how valuable canines have been to us is irrefutable, thanks to their depiction on cave walls where they used to dwell with Mankind millennia ago. This relationship probably began as one of mutual benefit: the dogs would help early man to hunt prey (their superior senses and agility would have been indispensible) and in return man would feed them and give them warmth and shelter.

Over time this relationship developed, and until recent times dogs were used to hunt Hares and Rabbits (hunting Hares is now illegal); dogs are still used out in the field to retrieve birds felled by shooting. Now, a dogs’ main purpose is to provide companionship and we have come to regard them as furry family members. Indeed some couples will refer to their dog as their ‘fur-kid’!

This change in relationship got me to wondering whether our preference for certain types/breeds of canine has changed; and if so, why? I did a bit of investigating and here are the findings, and the possible reasons behind the statistics.

One thing that has undeniably influenced our choices is media……….. 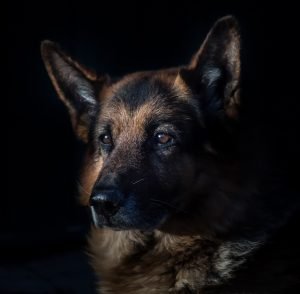 In the 1920s, the German Shepherd Dog (GSD, also known as the Alsatian) was the most popular choice; no doubt this breed’s popularity was boosted by canine film star ‘Rin Tin Tin, a GSD who was rescued from a WW1 battlefield before finding fame on the silver screen. The next decade, the 1930s, saw the Wire Fox Terrier get the crown, possibly for a couple of reasons: King Edward VII had one of these dogs, and also their smallish size meant that they were a cost-effective pet in the Great Depression era.

Never let it be said that the showing world has no influence on our pet selection; in the 1940s the champion showdog ‘My Own Brucie’ ensured that the Cocker Spaniel would reign supreme in this decade. In the 1950s it was the time for cartoon strips to shine; specifically Charles Schultz’s ‘Peanuts’ and its canine star, Snoopy. Widely believed to represent a Beagle, it was no surprise that this lovable breeds star rose in this decade. A little later on, in the late 1970s, Garfield’s sidekick, Odie, was also thought to be based on a Beagles shape.

The next two decades, 1960s and ‘70s, were dominated by the Poodle, beloved now as a cross with many other breeds to create ‘Cockerpoos’, ‘Sproodles’ and ‘Shih Tpoos’; these cross-breeds sell for crazy money sometimes, thanks to the demand for them. Poodles are a fantastic breed that comes 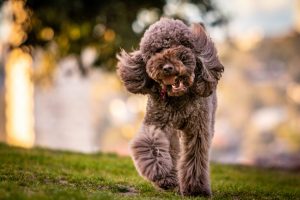 in many sizes (Miniature, Toy and Standard) and many colours. Notable celebrity fans of Poodles include Jackie Kennedy Onassis and singer Barbra Streisand.

In the 1980s, the lady was queen bee. Hands up those who love Disney’s ‘Lady and The Tramp’? Not just me then? J. The gorgeous Cocker Spaniel breed had enjoyed some acclaim in the 1940s, but claimed the crown in the 1980s thanks to this iconic film (originally released in 1955) being re-issued. Just as the Poodle had dominated two decades, so did the Labrador Retriever in the 1990s and noughties. Thanks to appearances in films such as ‘The Incredible Journey’ and ‘Marley and Me’, this mild mannered breed cemented itself at the heart of family’s world-wide. In the UK we also had the adorable ‘Andrex’ puppies to tug at our heart strings, and let’s not forget the invaluable role they play as guide dogs for blind and visually impaired people. Other current advert stars include ‘Stan’ the Pug (Vernon’s bingo) and ‘Moose’ the Boxer (clear score credit checker).

Celebrity influence rears its head again to influence our first choice of canine companion in the 2010s; the French Bulldog. Toy breeds became ‘de rigueur’, generally, last decade, but thanks to Lady Gaga and the Beckham’s the ‘Frenchie’ got the glory of the top spot – along with 39 MILLION (!) Instagram # likes. Television programmes such as ‘Britain’s Favourite Biscuit/Crisp Flavour’ etc. are avidly watched, and in 2019 ‘Britain’s Top Dog’, hosted by Ben Fogle, saw the handsome Staffordshire Bull Terrier (or ‘Staffie’ as they’re affectionately known) get the gold medal.

Much maligned in the past, this breed is basking in its time in the spotlight as ‘Top Dog’; and rightly so. Despite its well muscled, stocky physique, Staffies are absolute softies around children, and the Kennel Club of Great Britain recommends this breed as a pet for families with children; this has lead to their nick-name of ‘Nanny Dogs’. Staffordshire Bull Terriers are very intelligent and easily trained – especially with food as the motivator! Check out ‘Ziggy Trixx’ on Facebook for evidence of this breeds great personality, temperament and trainability 🙂 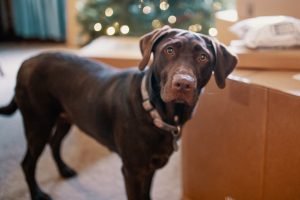 Northern Ireland bucks this UK trend, eschewing the Frenchie altogether in favour of the English Springer Spaniel. Whatever the breed(s) of your dog, we at Saint Leonard Veterinary Centre think they’re all paw-fect and deserve their place at the centre of your family 🙂

Just like us humans, all dogs have their own personalities, quirks and individuality; what interests one dog will hold no appeal for another, and this applies to toys and treats. Breed and personality traits definitely need to be considered when getting your own canine companion. Working breeds, especially Border Collies, Cocker- and Springer- Spaniels, are generally very intelligent and active, and if these needs aren’t met they can become very destructive around the house and garden. Farming and rural settings (or a very active urban household) are suited to these breeds of dog as they require several hours of daily exercise to harness their energy constructively. Families generally find their best friend in smaller and /or more laid-back breeds that need less intense physical exercise and can get adequate mental stimulation in garden sessions of chase-and-fetch.

So there you have it: the findings of my research, which has at times contradicted itself – gotta love t’interweb! For my part, I personally go on personality rather than looks when it comes to bringing a new furry family member into clan Underhill (perhaps as well for my cross-breed ladies, Poppy and

Betty). I’m sure there are some of you out there who say but my dog’s a ….. (breed I haven’t mentioned),; please don’t shoot me, I’m only divulging the results of my internet sleuthing! All dogs are superstars in their owners eyes, and that’s just the way it should be 🙂

Remember to keep your pooch in tip-top health by staying up-to-date with their vaccinations and worming & flea treatments, all services we offer here at SLVC. I’ll just mention our health plans too, especially our ‘Gold Plan’ which offers some nice perks to its members; please contact a member of the team for more details 🙂

Until next time; stay safe (in relaxed lock-down conditions), stay well, and be happy 🙂