The other day, as I watched Poppy and Betty racing around together on their walk, I thought how nice it was for each of them to have a playmate. Yes, they have moments where they get on each other’s nerves (don’t we all!) but for the most part, they’re best buds. It was, for a long time, thought that dogs couldn’t have ‘friends’, but more recent observations that look at domesticated dogs’ behaviour (rather than that of wolves) disagree – there are many anecdotes of dogs displaying great loyalty and affection to one specific other dog, or even depression at losing their playmate.

When I look at my two pups curled up together or playing happily, there’s no doubt in my mind that they’re good mates. And then, of course, there’s Ziggy, who adds a special feline strand to create a unique three-way furry friendship (strictly on cat terms, obviously!). Psychologist Stanley Coren, who specialises in animal psychology, looked specifically at dogs’ ability to make ‘friends’, and wrote: “Dogs that have been properly socialised will congenially approach virtually anything that is alive, regardless of its species, and, unless they receive hostile signals, they will attempt to establish a good-natured relationship.” He goes on to explain that, as well as making friends with other dogs, “The bond that dogs can establish with other species is often dramatic and poignant.” Stanley shares a story of a Labrador named Puma from Bristol. He saved a kitten that had been thrown into a lake by a gang of boys. Initially Puma took the kitten back to the boys but, when they did it again, he realised they were enemies and he needed to save the drowning kitten. He ran home with it, put it by a heater to dry out, and subsequently the pair became inseparable playmates for life.

And, this ability to befriend extends beyond dogs. 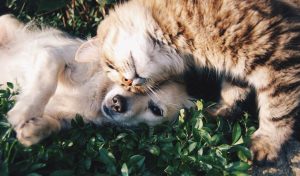 If you look online, this is just one of many, many heart-warming stories of inter-species animal friendships. I kid you not, I’ve been here for hours watching You Tube videos and reading tales of life-long loves between a dog and a duck, a chimpanzee and a tiger, a giraffe and an ostrich and even the very unlikely trio of a lion, a bear and a tiger. Whatever psychologists may say about the reasons for these bonds or the depth of the ‘feelings’ the animals may have, there’s clearly some undeniable affection going on there. I’ll treat you to this little video of Bubbles the elephant and best friend Bella the black Labrador… but beware, once you’ve watched one, you’ll soon find another cute animal clip and before you know it you’ll look up and it’ll be dark outside and the kids will be hungry (or I’m told that can happen… clearly I’m not speaking from experience here…ahem!).

So, anyway, back to my point. I think it’s pretty clear that, call it what you like, some kind of bond or companionship can be formed between animals of the same, or even different species. So, what does that mean for you and your pets? Well, there are some pets that really shouldn’t be solitary – in fact, so much so, that in Switzerland they’ve actually made it illegal for animals such as guinea pigs and parrots to be kept alone! They’re such social species that solitude can be psychologically damaging, so Swiss law states that they must be housed in pairs, at least.

It can all get a bit confusing as, while some small animals love company (such as mice, guinea pigs, chinchillas, rabbits) others, such as hamsters, are quite happy alone. It’s best to thoroughly research this before getting a small pet – and be careful of mixing un-neutered males with females unless you want an ever-increasing family of pets! (Bear in mind that it’s not possible to neuter some small animals due to their size). While many of these small animals are happy in groups, that’s not to say they’ll always be friends. Introducing new additions to established groups or suddenly putting adults together can cause friction so it’s best to pair or group them from a young age.

As for larger pets like dogs and cats – should they have a ‘friend’?

Well that’s really up to you and your pet. Some dogs and cats are happy alone, while others love a companion. You know your pet best – how sociable is it with other animals in the neighbourhood or with visitors? Have they lived with another pet before? Are they quite a solitary type or do they love to play? Often it’s better if both pets are young when they’re introduced rather than bringing a new addition into an already established home, but this can work if you’re careful. Be mindful of your original pet and make sure they’re not feeling that their territory is being invaded by this new family member. Don’t try to rush them into a friendship; they’ll bond in their own time, in their own way.

Clearly, the ideal scenario that we all strive for is this unbreakable animal bond – whether that’s within or across species. But, we all know that life doesn’t always work out exactly how we want it to. So, what do you do if your pets fight like the proverbial cat and dog? How do you cope if they’re very much foes, not friends? Even the so-called ‘sociable’ animals that like companionship can fight,

especially when paired randomly with another adult. They may, or may not, grow to like each other – but they’ll need to be given space and time to do so. When you first introduce a playmate, whether that’s a new cat, dog or a small caged animal, make the introduction in a neutral area and allow the established pet to have their own personal area (bed, cage area, room) to retreat to that’s out of bounds for the new pet. You can even introduce the scent of the new pet before making the actual introduction, by bringing in a blanket for your current pet to sniff at and get used to – that way, it’s not a complete shock when their new furry ‘wanna-be’ friend comes trotting in.

It’s tempting, especially with a new puppy or kitten or something really funny and cute, to fawn over the newbie and leave Fido or Kitty feeling pushed out. You need to make a concerted effort not to let this happen! Give your ‘oldie’ plenty of fuss and attention before, during and after the introduction. Try not to interfere too much in the ‘getting to know you’ process, even if there’s a bit of snapping, hissing or snarling – the pets will establish their own pecking order and you need to leave them to it. Obviously, if there’s some serious scrapping going on you’ll need to intervene though! It’s unlikely that they’ll become bezzies straight away, so be patient. They’ll probably go through a ‘tolerating each other’ stage first, so bear with it. If this tolerance phase doesn’t seem to come, and your pets are determined not to like each other then there are things you can do to help…

Obviously the solution would be to separate them and have them in their own cages/runs. Just this separation of territory can do the trick and you may find that they get along fine through the bars of their cages or when they’re out at playtime, as long as they’ve got their own distinct space to retreat to.

(whether it’s a dog/dog, dog/cat or cat/cat mix) you can still make sure they have their own personal space (placing beds in separate areas or using stairgates in doorways to create a barrier) and avoid any sharing of toys/food bowls/meal times that can cause friction. Give fuss and attention equally and freely to both animals and try not to chastise one constantly for behaving badly towards the other (even if, in the words of toddlers, ‘he/she started it!’). Even if the situation is stressful, stay as calm as you can because otherwise they’ll pick up on your anxiety (yes, I know it’s easier said than done!). If you have a particularly boisterous and lively dog then keep it on a lead at first around the other pet so they have a chance to explore each other’s smells without being pounced on! Praise heavily if they do show a calm interest towards each other and, above all, be patient. If you’re really struggling and living in a constant animal warzone is taking its toll on your family and the pets, consult an animal behaviourist who’ll be able to give you specific advice relating to your pet’s breed and your individual situation.

Hopefully, in time they’ll go from sparring partners to that dream of an inseparable animal friendship.