Pets, as we all know, are much-loved members of the family. We welcome them into our homes and it becomes their own (more often than not, they entirely take it over – seeming to believe it’s actually more their home than yours!). However, sometimes our pets bring in some unwelcome guests. Guests that can cause all manner of problems for both animals and humans, and ones that can be pretty difficult to evict. Yep, I am, of course, talking about parasites. Just to warn you, it’s not a particularly comfortable topic, it’s likely to make you feel a bit squeamish and probably rather itchy, but unfortunately it is an important issue that all pet owners need to be aware of.

So, first of all, let’s get down to the nitty gritty of what a parasite actually is. It really is a bit grim when you think about it… a parasite is an organism that lives on its host and get its food at the expense of its host. So basically, it lives on and feeds from your pet. Not pleasant, and really not the kind of guest you – or they – want to be entertaining.

Your pet can be affected by either internal or external parasites – usually worms (internally) and fleas or ticks (externally). These parasites are very common and can be picked up from anywhere. It’s highly likely that your pet will play host to them at some point in their life – in fact, puppies and kittens very often have worms, they can even be born with them. Because these parasites are so prevalent and so prolific, it really is essential that your pet is regularly given effective, good quality treatments to control these unwanted visitors.

There are numerous different types of worms that can affect your pet, the most common being roundworm and tapeworm. (There are also hookworms and whipworms, but these are far less common in the UK, and lungworms, which I’ll come to later…)

Roundworms and tapeworms live in your pet’s intestines and can produce a staggering 100,000 eggs per day … they are not going to go away on their own. It’s very difficult to prevent or eradicate them entirely but they can be treated and those present at the time of treatment will be killed. By maintaining frequent treatment, you can break the cycle and stop worms from becoming a problem for your pet. If left untreated, an infestation of worms can cause illness and, ultimately, life-threatening conditions.

It’s not always easy to spot the early warning signs of worms, but there are some things you can look out for such as visible signs of worms or eggs in your pet’s faeces or around their bottom. They may be ‘scooting’ (dragging an itchy bottom across a carpet – delightful, I know!) or your cat may be grooming their back end more than usual. Later signs (evidence that an infestation has really got hold) can include vomiting, diarrhoea, weight loss often accompanied by increased appetite, dull fur/coat and lethargy.

Once these nasty guests have made themselves at home they can be really difficult to get under control and, during their stay, they can cause some pretty nasty damage, so it really is vital that your pet is regularly treated to prevent an infestation. Prevention really is better – and much easier – than cure.

Your pet won’t just keep their visitors to themselves either. Worms can be passed to humans, with children especially at risk, so teaching good hand hygiene is really important. Washing hands regularly has really been drilled into us all over the past couple of years (singing ‘Happy Birthday’ is entirely optional!) but it’s not just Coronavirus that can be spread by dirty hands!

Another type of worm that is fortunately less common, but significantly more of a threat to your pet’s health, is lungworm. It’s more of a problem in the southern areas of England and south Wales but there does appear to be some spread north, even as far as Scotland. As the name suggests this particularly nasty guest isn’t an intestinal worm but rather it takes up residence in an animal’s blood vessels. It can cause heart problems, breathing problems, pneumonia and lead to haemorrhages. Early symptoms can include coughing, breathing problems and reluctance to exercise or bleeding and abnormal blood clotting. 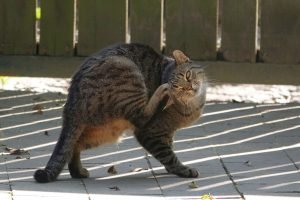 So, we’ve discuss the nasty little things that like to live inside your beloved pet … now we’ll look at those that choose to live on your furry friend, namely fleas and ticks.

Fleas, again, are incredibly common but, once again, it is much easier to try to stop them taking up residence on your pet than it is to get rid of them once they’re there. And, once they are there, they won’t just stay on your pet. Yes, your pet will be the ‘host’ (to put in bluntly, they’re the ones whose blood they’ll feed off) but they’ll spread their eggs, pupae and larvae all over your house. Literally everywhere. When you treat your animal for fleas you MUST also treat your home (even areas where your pet doesn’t go) otherwise the eggs, pupae and larvae will just hatch at a later date and continue the cycle.

Fleas can bite humans but they won’t live on you … they’ll just have a little nibble (often on the lower legs or ankles) before returning to their preferred host, your pet.

They can affect cats and dogs in various ways from itching and minor irritation to very serious – sometimes life-threatening – conditions if an infestation is left untreated. Oh, and just to really spice things up a bit, fleas can also carry tapeworm eggs. Just great!

Ticks are far, far fewer in number than fleas – you pet won’t get an ‘infestation’ but will more likely just pick up one or two. However, don’t let this fool you; they can be just as nasty. These horrid little blighters don’t leap about on their hosts like fleas do, but rather they bury their jaws in and fill themselves up with blood. Once they’ve had their fill after a few days they’ll drop off – but by then, the damage could already have been done. Ticks can spread dangerous diseases and bacteria, including Lyme disease, which can affect dogs, cats and humans. They can be picked up outdoors, usually from woodland, grassland or heath areas or places with sheep, deer, hedgehogs or rabbits. They’re often big enough to feel or spot on your pet but it’s vital that you get them removed safely as soon as you notice them – don’t just pull them off as they can leave their jaws in the host. Use a tick removal tool (if you know how to do this) or ask your vet to safely remove this unwanted visitor.

Once again, prevention is best. Regular tick and flea treatments can prevent these parasites from taking hold in the first place.

So, if you haven’t already got the message loud and clear, the moral of the story is … regularly treat your pet with good (vet quality) treatments to stop them playing host to any of these uninvited guests! Both internal and external parasites can be very hard to get rid of once they come to stay and they can do a lot of harm to your pet – so don’t let them get their foot in the door! (That’s why flea, tick and worming treatments are all included as standard for all dogs and cats on our Gold Plan.)

Right, all that talk of parasites has me itching all over! It’s an important part of veterinary work but I can’t wait to move onto a more pleasant topic in my next blog. Until then, one more reminder for those at the back … don’t forget your pet’s flea, tick and worming treatments!